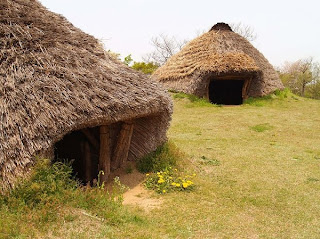 To the right is a picture of a pit dwelling house. In ancient Japan was two popular types of houses. A pit dwelling house and a raised house.
A pit dwelling house is a house in the ground. It is started by digging a hole, and then columns are insterted inside of it. A roof is made out of poles and mud. It is then covered with a type of earthy covering. A typical enterance would be through the roof. A ladder would come from the opening and onto the floor. During the winter these homes were warm, and during the summer they were cool. The pit houses were rather comfortable, but were only lived in for around 10 years before they became unsafe, at this point they would have to be abandoned.

The main purposed of a raised house was to store food so that the food wouldn't be spoiled from the heat and humidity. Yes, they were raised off of the ground.
Posted by Michelle Anne. at 7:02 PM